Ascension Temple and Retreat at Luxor 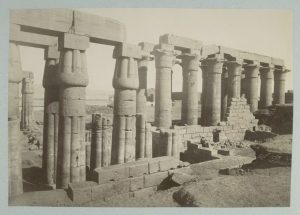 This etheric retreat of the Brotherhood of Luxor is superimposed upon the physical retreat, which is composed of a large, square, white stone building with a surrounding wall and courtyard, and an underground building including the Ascension Temple and Flame Room.

Pyramid Temple for Initiations of Transfiguration and Resurrection

A few miles from the focus is a pyramid, also superimposed with etheric activity. Here in the upper room of the pyramid is the king’s chamber, where the initiations of the transfiguration and the resurrection take place. Other rooms within the pyramid are used for initiations given by the Council of Adepts to the devotees who come to Luxor prepared for the most severe disciplines and the total surrender of their human consciousness.

The focus of the ascension flame was carried by Serapis Bey to this locationjust before the sinking of Atlantis. In succeeding embodiments, he and the brothers who had served in the Ascension Temple on Atlantis built the retreat, which was originally above ground.

Here in an underground building is the circular courtroom where the last judgment is conducted by the Council of Adepts. Nearby is the Flame Room, a square building having doors on two sides. One enters here as a candidate for the ascension only after all initiations have been passed.

Forming another square within the room are twelve white pillars, decorated in gold relief at the base and the top, which surround the central dais on which the ascension flame blazes. They represent the twelve hierarchies of the Sun and the twelve Godly attributes

Each one who ascends from this Temple is ascending because he has attained God-mastery through the disciplines and the tutelage of one of these twelve solar hierarchies, the hierarchy under whom he was born in the embodiment in which he was destined to ascend.

The Process of the Ascension 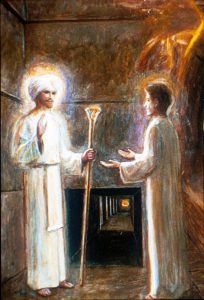 The candidate for the ascension is bidden by the hierarch of the retreat to pass through the pillars and to stand in the center of the ascension flame. At that point, the individual’s cosmic tone is sounded and the flame from Alpha is released from the circle on the ceiling, while the flame from Omega rises from the base.

The moment the individual’s tone is sounded and simultaneous with the action of the flame, the seraphim in the outer court trumpet the victory of the ascending soul with the most magnificent rendition of the “Triumphal March” from Aida that anyone will ever hear. The discipline that is the keynote of this retreat is felt in their precise, golden-tone rendition of the piece.

In the underground complex there are other flame rooms for the meditation of the devotees who serve there. There is a focus of the resurrection flame, and there are chambers for the preparation of various initiations, including those of the transfiguration and the resurrection.

Serapis Bey’s methods of discipline are tailor-made for each candidate for the ascension. After an initial interview by himself or one of the twelve adepts, devotees who come here are assigned in groups of five or more to carry out projects with other initiates whose karmic patterns lend themselves to the maximum friction between the lifestreams. Each group must serve together until they become harmonious, learning that those traits of character that are most offensive in others are actually the polarity of their own worst faults, and what one criticizes in another is likely to be the root of his own misery.

Aside from this type of group discipline, individuals are placed in situations that provide them with the greatest challenge, according to their karmic pattern. In this retreat one cannot simply up and leave a crisis, a circumstance or an individual that is not to his liking. He must stand, face and conquer his own misqualified energy by disciplining his entire consciousness in the art of nonreacting to the human creation of others, even as he refuses to be dominated or influenced by his own human creation.

The ascension flame is an intense fiery white with a crystal glow.

The melody of the flame is the Triumphal March from Aida, and the keynote of the retreat is Liebestraum by Franz Liszt.

Serapis Bey Calls Spiritual Seekers to the Path of the Ascension

“I am announcing to all candidates of the ascension and to all who desire to be candidates for the ascension flame at the close of this or their next embodiment that we have arranged classes at our retreat that may be attended by those aspiring after Purity’s matrix.

“To those who have said in their hearts, ‘I desire above all to be perfect in the sight of God, to have that perfect mind in me which was also in Christ Jesus,’1to those who yearn to merge with the flame of God’s identity and to find themselves made in the image and likeness of God, to those in whom this desire burns day and night – to you I say, Come and be tutored in those precepts of the Law that perhaps have escaped you in this life or which perhaps you have overlooked in previous embodiments.

“For we are here to fill in the missing links in the chain of Being so that when the hour of your transition comes and you find yourself as the rose on the other side of the wall, you will have the momentum and the inner soul-direction that will carry you to this or one of the other retreats of the Brotherhood either for final preparation for the ascension or for preparation for re-embodiment.”2

Call in the name of your own Christ Self to Serapis Bey and the Chohans of the Rays to invoke their assistance on the path. Ask to be taken to to the retreat of Serapis Bey on Thursday night in preparation for Friday’s tests on the white ray..

In the name of the Christ, my own Real Self, I call to the heart of the I AM Presence and to the angel of the Presence to take me in my soul and in my soul consciousness to the retreat of Serapis Bey at Luxor. I ask to join the candidates for the ascension as they hear the word of Serapis Bey and learn of the Redeemer that lives within the flame of my heart. And I ask that all information necessary to the fulfillment of my divine plan be released to my outer waking consciousness as it is required. I thank thee and I accept this done in the full power of the risen Christ. 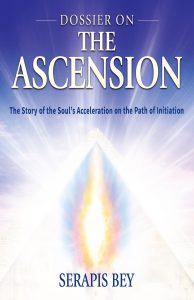 Dossier on the Ascension: The Story of the Soul’s Acceleration into Higher Consciousness on the Path of Initiation Serapis Bey gives practical keys for spiritual growth that can help you earn your ascension while answering the questions about life after death. Seraphic meditations. Buy direct from Summit Lighthouse bookstore or Kindle